Pat Noonan, founder and owner of the Deck & Basement Company in Minneapolis, MN, is a highly sought after contractor. In fact, he’s one of the largest builders of custom decks in Minnesota.

Noonan’s father, who was also in the construction industry, instilled a love for building something spectacular from nothing at an early age. “There is something primal about transforming raw materials into a finished product, especially when you do it with your hands,” Noonan said when he walked the TimberTech® team around his latest and greatest build in the Twin Cities metro area. “To combine that with intelligent design and superior craftsmanship to create something that others covet and cannot do is incredibly gratifying,” he added.

Building Is in His Blood

As a kid, Noonan often found himself tagging along with his dad to build sites of all kinds – not just custom decks. While he was assigned the unwanted tasks, Noonan picked up more than the dropped nails. Hard work, integrity, and doing the job right were instilled in him at an early age. Crediting his father, Noonan’s credo for expanding his company: “There is nothing that cannot be fixed if you are willing to admit a mistake.”

The advice has paid off. For the past 15 years, Noonan has grown his family owned and operated business into the behemoth it is today, which builds upon his additional 10 years in the industry before he founded his company. He and his skilled crew of craftsman have built over 2,000 decks and now average four to six a week.

“With over 25 years in this industry, I have built nearly everything, but my passion is with decks. Clean and straightforward with minimal surprises and not invading someone’s personal space,” Noonan said. “Taking the kitchen away from a family of five is much different than not being able to use the backyard for a week.”

Calling in the Big Guns

When Jimmy Rathmanner, a Minneapolis native, called Noonan to replace his dilapidated deck, Noonan didn’t bat an eye. Rathmanner painted a picture of an outdated, splintering deck that had come with the lakefront property.

Rathmanner described his ideal deck: a place for friends and family to grill out, hang out, and be the location of their fourth of July blowout.

The next step was Noonan touring the property. The deck would need to be hardy as well as an entertainment space since it would be bombarded with the elements every season of the year. Summer brought water sports and wet, bare feet; fall brought leaves and shedding trees; winter in Minneapolis brought a deluge of snow. Like most of the custom decks he has built in the Twin Cities metro area, Noonan knew this one was going to have to withstand the full elemental gauntlet.

Relying on his knowledge of custom decks, Noonan turned to the materials he knew were best for the tough job: TimberTech AZEK composite decking.

“I have been installing TimberTech decking since it was launched. [Deck and Basement Company] installed the first AZEK deck in Minnesota. It’s been our main synthetic product line ever since.” Noonan said as he pointed at the boards from TimberTech AZEK Vintage Collection.

Noonan has been exclusively working with TimberTech decking for the past 20 years. “With the advances in composite technology, the declining lifespan of wood decking, and the cost of maintenance or replacement, we [at Deck and Basement Company] felt it became a disservice to our clients to continue to install wood decking,” Noonan explained.

For the Rathmanner deck, Noonan suggested the TimberTech AZEK Vintage Collection. Having just used every color in the collection on the Rock The Garden deck he built for TimberTech, Noonan suggested pops of regal Dark Hickory to complement the calm gray of Coastline, which would compose most of the deck. Noonan thought it would be sleek to incorporate the TimberTech AZEK Porch boards in Coastline for a tighter fit in the center of the inlay and under the white fascia running the perimeter of the deck.

With materials chosen, it was time to get Rathmanner’s must-haves: a place for a grill, a built-in buffet that doubles as a bar, and stairs that lead to the yard and the lake.

Beyond that, the Rathmanner family had a few issues with the existing deck. The biggest being its multiple levels that made it difficult for grandparents to navigate easily. Noonan took that detail into account when drawing up new designs. One level meant some creative shapes were required but wasn’t out of the question. Using his expert knowledge of heat bending from the countless other custom decks he’s built, Noonan planned for a dramatic – and gorgeous – curve spanning almost the entire deck.

The Rathmanner deck was different from any of the custom decks Noonan had built before in another refreshing way. “It developed over multiple designs with input from various sources,” Noonan said. “Ultimately, the shape was identified, and the client turned it over to me to build what my vision on the inlays, sizes, accents was. I have never had a client just say, ‘We trust you know better than us, that’s why we hired you.’ Then let me create – especially on a project of this magnitude. I’m confident that the end product reflects the freedom they gave.”

A Deck That’s Truly Decked Out

And it did. The resulting deck is a project worthy of praise. “It’s 62’ feet wide, up to 25’ out and totals over 1,400 square feet. It has curves, a fire feature, a kitchen, benches, inlays, and lighting. It’s a portfolio in one picture,” said Noonan.

(Get the full picture of Noonan’s custom deck design by exploring the 3D space below.) It’s All About the Deck Details

Custom decks aren’t usually lauded for their beauty and style details, but with TimberTech decking it’s the details that matter most – even the smallest ones. Noonan knew that this deck deserved only the best. He turned to Cortex to fasten the deck to the brand new substructure, then filled each screw hole with color-matched plugs.

The bigger detail work, like the herringbone inlay in Coastline with pops of the Dark Hickory accent color, is a favorite of unfussy Rathmanner. The innermost inlay composed of Coastline Porch boards to create a different, tight-gapped effect – with a small square of Dark Hickory as the final focal point in the center of the 64’ wide behemoth.

Rathmanner’s off-hand comment to Noonan during the consultation process about a built-in fire feature was seamlessly incorporated into the deck – and was a surprise to Rathmanner upon seeing it come to life. The curving bench to the side of the fire feature astounds Rathmanner. The center Coastline boards surrounded by the majestic Dark Hickory boards in a gentle curve that mimicked the larger curve of the deck left Rathmanner speechless at first. He didn’t know TimberTech AZEK could be so easily manipulated to different shapes with a little heat and a lot of experience.

The Rathmanner family reports that the multiple spaces of sitting vignettes are the best part. As a family who entertains guests regularly, it’s nice to have space for different friend groups or conversations. These vignettes are a true homerun in everyone’s eyes.

Putting in the Work – And Seeing the Award

The custom decks that Noonan usually builds are just as impressive. While not always the same size or scope as the Rathmanner’s party deck, Noonan makes time to do good in his community. Deck and Basement Company consistently honors and supports veterans by donating time and labor. His team has built 10 projects for the Minnesota Assistance Council for Veterans and the NADRA Deck for a Soldier Program.

Setting aside Noonan’s impressive custom decks, Noonan embodies the core values that TimberTech strives for. The Deck and Basement Company always does the right thing, values radical transparency, and Goes Against the Grain of what everyone in the industry is doing. And it’s actively paying off. 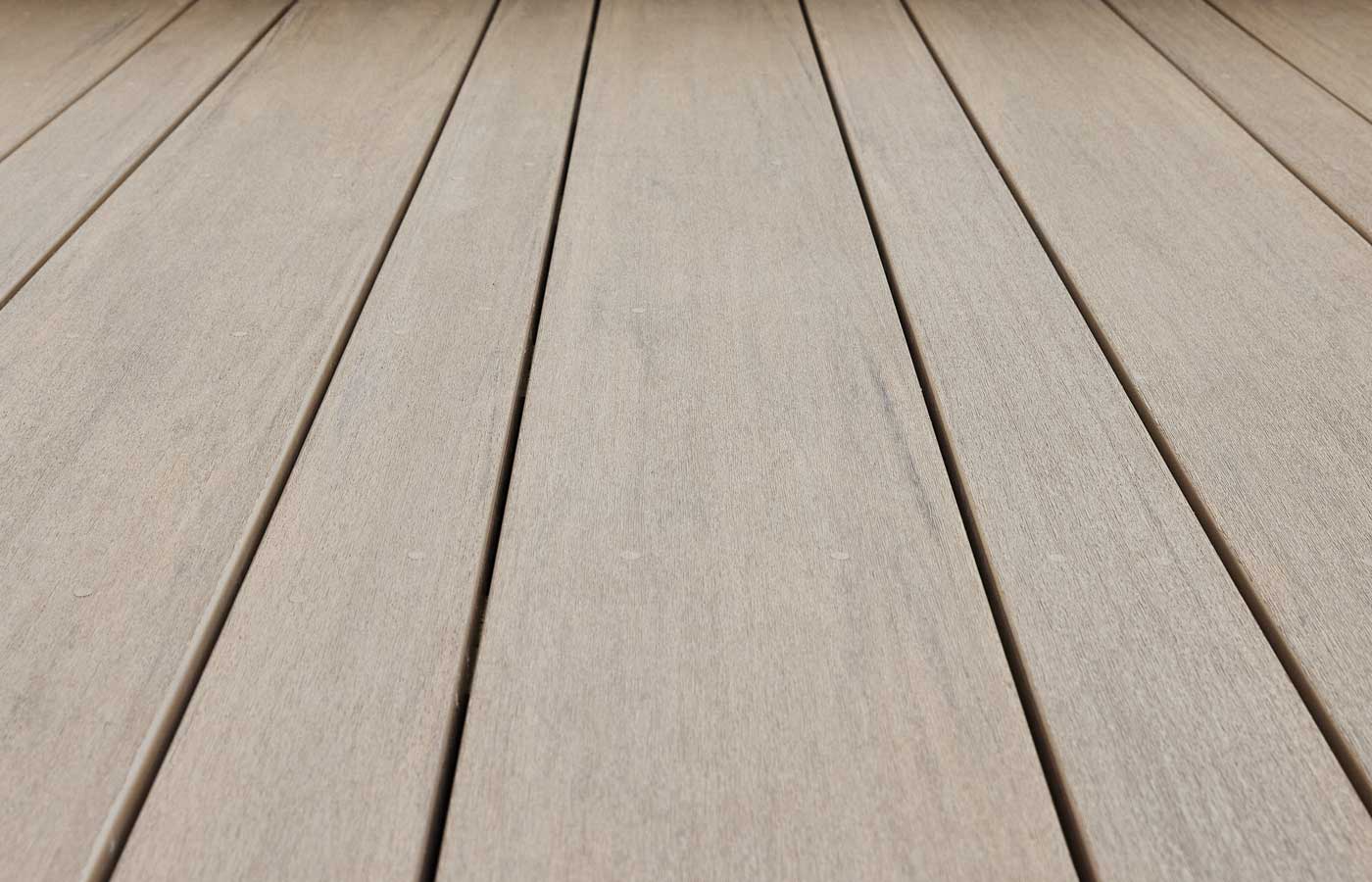 Our capped polymer and capped composite decking lines combine recycled material with all the beauty of traditional wood.

Composite Deck Railing: Your Options & What You Need to Know

This website uses cookies to improve your experience while you navigate through the website. Out of these, the cookies that are categorized as necessary are stored on your browser as they are essential for the working of basic functionalities of the website. We also use third-party cookies that help us analyze and understand how you use this website. These cookies will be stored in your browser only with your consent. You also have the option to opt-out of these cookies. But opting out of some of these cookies may affect your browsing experience.
Necessary Always Enabled
Necessary cookies are absolutely essential for the website to function properly. These cookies ensure basic functionalities and security features of the website, anonymously.
Functional
Functional cookies help to perform certain functionalities like sharing the content of the website on social media platforms, collect feedbacks, and other third-party features.
Performance
Performance cookies are used to understand and analyze the key performance indexes of the website which helps in delivering a better user experience for the visitors.
Analytics
Analytical cookies are used to understand how visitors interact with the website. These cookies help provide information on metrics the number of visitors, bounce rate, traffic source, etc.
Advertisement
Advertisement cookies are used to provide visitors with relevant ads and marketing campaigns. These cookies track visitors across websites and collect information to provide customized ads.
Others
Other uncategorized cookies are those that are being analyzed and have not been classified into a category as yet.
SAVE & ACCEPT
Scroll to Top